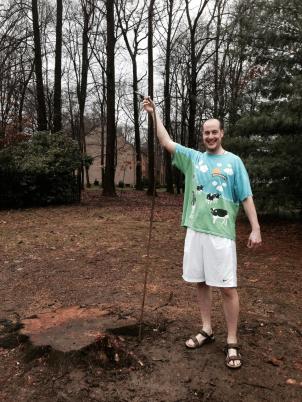 There was a metal stake sticking out of the tree stump that we wanted to grind.  At the Ashram, we had removed a tree, but the metal stake inhibited the stump grinding plan.  Devaraja (Steve) Thoman tested the stake and, finding that it wiggled well, said he thought he could remove it, but needed some equipment.

One morning at breakfast, I joked with him about one of the differences between men and women — that guys like to get dirty, even muddy.  Later in the morning, Devaraja decided to tackle the metal stake.  This was late fall, with very wet ground and a few patches of snow on the ground.

He pounded on the stake to loosen it, then grabbed and pulled.  It came up a few inches.  He repeated the task, each time getting a little more of the stake above ground. A passing neighbor saw him and stopped to offer help.  Devaraja thought he’d be fine and said, “No, thanks.”

A few pulls later, he groaned with the effort as he pulled.  The neighbor was passing by again, with his young daughter on a small bike riding along with him.  This wonderful gentleman came running to help.  Devaraja warned, “You’ll probably get muddy.”  The neighbor laughed and said, “That’s why I’m outside!”  They both laughed, with Devaraja thinking of our breakfast conversation.

They pounded on the stake, wiggled it and then pulled, repeating the task several times. Each time the stake came out a little more.  What started as 18” of metal stake grew to 4’, then 5’ and more.  They were shocked to discover, when they finally got it out of the ground, it was 8’ tall!

The neighbor and his daughter went on their way.  Devaraja, exhausted and panting from the exertion, lay on the ground with his head in a snow patch for 5 minutes.  He then came in to share his trophy, photographed here.

I completed the lesson for him, “The roots of your stuff are always deeper than you think.”  You think it’s a little problem but, when you dig into your own needs and reactions, you’ll find that they are rooted deeply in there, even rooted in lifetimes of self-repeating patterns.  You have to dig deep to get free.  Mantra does the digging for you.  Do more japa.

2 thoughts on “You Gotta Dig Deeper by Swami Nirmalananda”