Since 1998, I have carefully considered “what’s in it for me” every time I’ve participated in a Svaroopa® yoga class, teacher training course or retreat.  I’ve had plenty of expectations.  “Exceeded expectations” doesn’t really capture my experience either.  It’s that my mind didn’t have the capacity to envision what I was about to get.

My first Svaroopa® yoga class was at a teachers’ conference focused on another yoga style.  I thought I was going to get a little time out, but I got noticeable release in my spine, for the first time ever.  A few years later, Swami Nirmalananda (then Rama) gave a Heart Opening weekend in the studio where I taught (a different style of yoga).  I enrolled in the workshop to “support” my colleague who was hosting Rama.  He needed no “support” as the studio filled with nearly 30 participants.  I was the only teacher in that group. 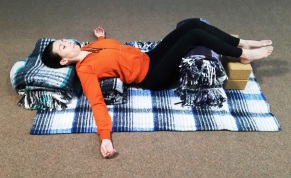 In Supported Fish, everyone was in bliss.  Except me.  My memory still presents me with the sensation of flames licking my sacrum and lumbar spine.  That was my first taste of awakened Kundalini, because a few months later my life started to change exponentially.  My granddaughter was born in Idaho and I soon found myself migrating to live there.  That move put me close to Swamiji’s 2004 Core Opening2 (squared) week-long immersion in Montana.  I signed up, expecting to “find my center,” since my move had unraveled life as I had known it.

What I found in Core Opening2 was not merely a sense of center, but the beginning of amazing expansion and transformation.  That week-long title’s resonance with E = mc2 should have tipped me off that it was time to fasten my seat belt.  It has not been what I expected.  Instead what I have found is being supported by “that for which I have always yearned” — Self.  Wonderment after wonderment has unfolded at the speed of light.

I took Foundations about a year later, and then entered YTT. After full certification as a Certified Svaroopa® Yoga Teacher, I took Meditation Teacher Training and then opened my own studio.  That granddaughter is now 16 AND she seems to actually like hanging out with me.  After a yoga class with me, her word for her Shavasana feeling was “contented.”

It’s such subtle, even seemingly insignificant events that blow my mind.  Flying home from our annual SVA Board retreat last August, I had a layover in Phoenix.  Waiting at the gate for my flight to Boise, I conversed with a woman flying on to Spokane WA.  I don’t remember how we started talking about yoga, but when she mentioned back pain, I told her about Svaroopa® yoga and our “deceptively easy, amazingly powerful” poses for spinal release.  I also told her about Francie Light, CSYT, who teaches in Spokane.  I had no expectation that the woman would remember our conversation even five minutes later.  But today I received this email from Francie:

I wanted to tell you that a new student started yoga on Tuesday.  She met you in the Phoenix airport and said that there was just “something about her” that attracted her to you.  So you talked to her and she found me, and here she is taking Svaroopa® yoga! 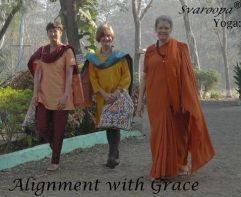 In the end, that is “what is in it for me,” witnessing the impossible-to-imagine miracles that unfold along this Grace-filled path.

Everyone has a calling. Ours is helping you.