Time just keeps ticking along, even though what’s inside is eternal.  I don’t feel any older today than yesterday, but the clock and calendar say I am.  So are you.   It’s a little like taking the elevator to the top of the Empire State Building:  you walk in, the doors close, nothing much happens, but when they open again, you’re in a different world.   You

haven’t changed, but the world keeps moving around you.  Whether it’s changes in your family, your work or a change in the political structure – you are still who you have always been.  Consciousness-Itself.  You are Shiva.  So am I.

The sages tell us that we experience this contrast every night.  Deep sleep gifts you with brief interludes of immersion into consciousness.  You’re re-enlivened by your unconscious dip into Consciousness-Itself.  This is what makes you wake up refreshed, like a whole new person ready for a whole new day.  Life keeps moving along, but your core essence is the Unchanging Reality from which it all emanates.  Meditation is more important than sleep because it gives you that dip into consciousness, but consciously.

Today is my birthday.  Turning 70 means I have actually already completed 7 decades.  Today is day one of my 80th decade.  I’m excited!  I’m really looking forward to it!  Yoga’s promise is that it just keeps getting better and, after 50+ years of yoga, I know this to be true.  Even before dedicating myself to yoga, I figured out that each new decade was like getting a job promotion.  More responsibility, more autonomy, more freedom, more impact, more expertise to draw on, more appreciation for the others in my life, more,

As an American baby boomer, I grew up with, “Don’t trust anyone over 30.”  But by the time I was 25, I could see that friends, already over 30, were so much happier than I was.  They had it much more together than I did.  I began to look forward to turning 30.  And everything did get easier.  Then 40, then 50 – I really have found each decade to be better.

Of course, I benefit from many decades of yoga practice, supporting my body in its life process.  Not to mention how yoga has freed me from the mental-and-emotional baggage I’d been bound by over many lifetimes.  Most importantly, there’s Baba!  His presence in my life gave me what I’d been looking for, fulfilled my purpose for taking birth.  Now I have the privilege of serving you in the same way.

In the intro mantras I sing before teaching, one line stands out today, describing Muktananda, who I am honoring in the chant:

to serve the needs of his devotees… 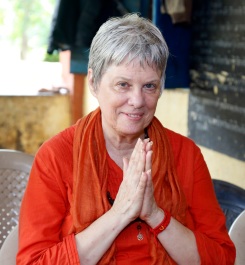 So today, on this anniversary of my birth, I thank you for giving me the chance to serve you.

8 thoughts on “Time is a Funny Thing”